Please email us at
[email protected] 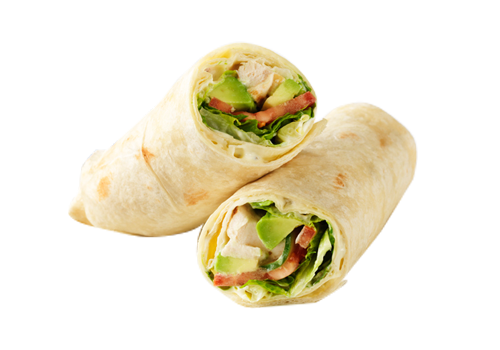 In the middle of Pesach cleaning we sometimes pause for a quick lunch. That lunch might be ‘wraps’. What is ‘wraps and what brocho do we make on it?

Wraps is a type of sandwich but whereas the traditional sandwich has two layers of bread with a filling in between, wraps is one piece of dough which wraps round the filling. It also tends to be a very thin dough. Is wraps hamotzie or mezonos? Let’s look into it.

In Gemoro Brochos (42a) we read that Rav Huna ate three cakes and did not say Bircas Hamozon. Rav Nachman said to him that even though these cakes were pas habo bekisnin, since he was eating them as a meal, he should have said bircas hamozon.

We already see that even though the food is pas habo bekisnin, if it constitutes a meal, it requires hamotzi and birchas hamozon. If not, we say mezonos and al hamichyo.

What is the definition of pas habo bekisnin?

The Ramo comments on the second opinion: “Some say that it is still considered bread unless there is so much of these extra ingredients that they are almost the main ingredient.” The Mishna Berura says that the Ramo’s comment applies to the first opinion as well and that for bread with a filling to be considered pas habo bekisnin there must be enough honey, sugar etc. to have a very strong effect on the taste. The Shaarei Tziun brings the Taz that even the Shulchan Aruch holds this first opinion. Since there are three opinions, what does one do in practice?

The Shulchan Aruch says as we are not sure, we are lenient and if we have eaten food of any of these three types we treat it as pas habo bekisnin and say al hamichyo.

The Aruch haShulchan also seems to hold this opinion. In 168:24 he writes that eier kichlech which are made with eggs and water are clearly not normal pas. Later he writes: “Our Sages only said that we should say hamotzi and bircas hamozon on bread that most people base a meal on. They were referring to dough baked in the normal way. If there is any change which causes most people not to base a meal on it, there is no obligation to say hamotzi and bircas hamozon…”

Now this would help for items which are clearly meant as a snack like eier kichlech and for bridge rolls which are intended for a kabolas ponim rather than a meal.. Can it be applied to a wraps? Do people eat wraps as a meal or as a snack? .

There is another factor with wraps which we have not mentioned so far. The Shulchan Aruch mentions another type of dough, nalsilka which is baked in a pan with vegetable leaves and because it is watery and thin, one says mezonos rather than hamotzie. The Shulchan Aruch mentions yet another type of thin dough called trisa and on this dough the Shulchan Aruch holds that we say only mezonos even if one is kovea seuda on it. Can we compare wraps to these types of dough? Rav Eliashev was once shown some wraps and he said that it was like trisa which, as we just said, does not require hamotzie even if we base a meal on it.

According to this reported psak of Rav Eliashev, the brocho on wraps will be mezonos even if we base a meal on it. However it is difficult to be sure that all wraps are made with such thin dough.

In conclusion. If we are eating wraps as a snack, if it is made with enough fruit juice which gives a strong taste to the dough, (which I’m told is the case in Gateshead), we certainly say mezonos. If we are basing a meal on such a wraps meaning that we fill it with a generous amount of filling and this is our lunch or supper, many poskim hold that one should say hamotzie like other pas habo bekisnin. If it is not made with fruit juice, there are opinions which allow us to say mezonos. However it would appear to be the case that many poskim hold that it is usual to base a meal on wraps and therefore the brocho should be hamotzie especially if we are indeed basing a meal on it. However according to Rav Eliashev the brocho on thin wraps will always be mezonos. Because of the doubt, we should take some ordinary bread and make hamotzie on that, have in mind the wraps and then bench as usual. However this only works if we are happy to have the bread but if we really don’t want the bread and we are only trying to solve the question of the correct brocho on wraps, it is questionable if this is a solution. My personal solution is for the kashrus authorities to tell the bakers under their supervision to make their wraps with thicker dough and without fruit juice and then they will be hamotzie without a question.

If you find all this too complicated, you could stick to the traditional sandwich.  And after that, it’s back to pesach cleaning!